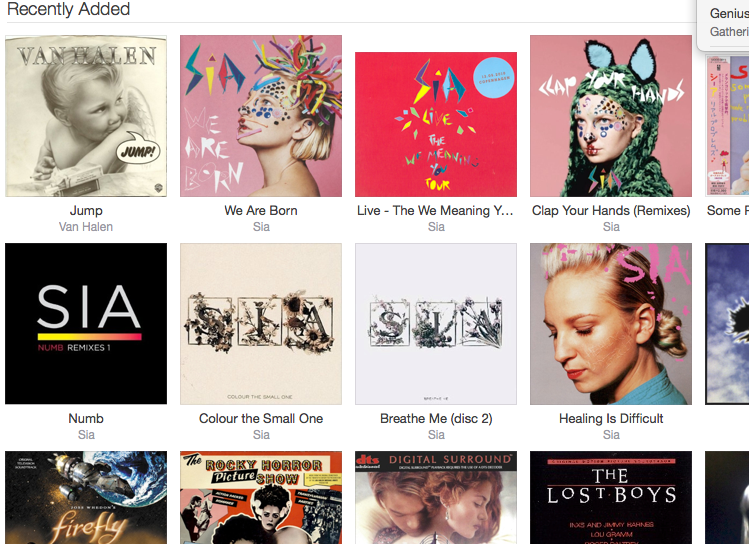 iTunes is fairly good at managing Music , Podcasts, Pdf’s
This Post is going to deal with the Music side of things and how Picard can help keep your library clean.

Picard connects with the Musicbrainz database and can perform several tasks. You can lookup a release based on the tag data within your music, however that doesn’t mean your music is what it claims to be. There is also the problem of having several versions of a release it isn’t unusual to find that what you thought was a complete album gets split between a number of releases. You can drag and drop tracks to ensure a reasonable track listing.

A better option is to scan your music. Picard will generate an audio fingerprint and then find a matching version from the database. Once again it will not always find the ‘right’ album particularly if the album is a compilation since record companies tend to reuse popular tracks again and again. However Picard will pretty much manage to validate tracks as being legitimate versions.

Unfortunately some tracks can come up as valid when in fact they are truncated. It is worth taking a look to see how close they match usually a couple of seconds difference can be ignored.
You can use picards tags that it finds or drag the tracks back to the left column if you prefer what you started with. Another thing you can do is slightly retag the Album name adding a suffix e.g -gold or -silver I use gold for a full album or silver for a partial version.

Sometimes you can have all or part of an album already in your iTunes Library by renaming your new version prior to saving it, the two versions should end up in separate folders it’s fastest to delete a release in iTunes than go through two versions of say 20 songs x 2 in the same folder. You generally just want to keep the highest bitrate version which you can fairly easily compare in itunes.

when bringing in copies from several locations its possible some may be duplicates within an album. The way I work i set picard to save in the automatically add to itunes folder. It creates Artist/Album folders and puts the track in there.

Generally it is best not to have iTunes running when you save. Otherwise you might have 5 versions of a song from the same album and you don’t want this in itunes 5 copies of track1 can be quite annoying and itunes is a pain to remove excessive duplicates from.

Unfortunately Picard doesn’t show bitrate and file size in the same window you can double click a track and see but only 1 track at a time with several dupes this is painful so it is easier to go into finder look in the album folder it has just created and when there are 5 copies of track5 for example you can keep the biggest one and delete the other 4.
When you are happy with what you are importing then start iTunes and it will import your new versions.

When Picard saves it moves. So the track which was in your downloads folder is moved to the automatically add to iTunes folder which if its an external drive or NAS means it free’s the space on your computer and you don’t have 2 copies on your laptop say.

At this point it is a good idea to go into itunes and select show exact duplicates.
This will show you any tracks that you have imported that already had a version in the same album. Take a look and decide which one you want to keep. There are two options in iTunes delete from iTunes and delete from disk. Sometimes iTunes ends up with 2 or more entries for a single file.

iTunes can be a little weird like that, so if you have 2 entries in the iTunes database and you delete the physical file then you delete the physical file for one entry and then when you go to the other entry the file is now missing and you have an ! point. You just deleted the only copy of that file. iTunes also has another quirk sometimes you may have a low bitrate version of a track and a higher bitrate version. You go into finder and delete the lower bitrate version and then click on the entry for the low bitrate version and rather than say it is missing itunes upgrades the track to point at the higher bit rate version and you have 2 entries pointing at the same file again. So be extremely careful about deleting physical files in iTunes. Unfortunately the only way to see if it is 2 physical files or not in iTunes is to open finder for the track and take a look. This is why it is better to not import dupes in the first place.

The second method may be better as it leaves unmatched files where they are in Nusic and you can deal with these on a case by case basis.

Of course this is a lot of work to clean up, you may have casualties along the way but the well organized library is worth it.

you can back up the library with rsync to a second drive or set of folders. This is a big job first time you run it but on the second run only files that are not already in your backup already are copied.

see rsync for examples of how to use rsync.  It is a linux tool but it is available for Osx and probably windows too.

Be very careful with how you write the command as powerful as it is it can be very destructive if you get it wrong.